When the first trailer of Dil Bechara was released online on July 6, there was an extremely positive vibe in the reactions. Within 24 hours, the trailer became the most-liked YouTube trailer ever! There were campaigns on different social media platforms to make Sushant Singh Rajput’s last film the biggest ever release! It was all so sweet… till it wasn’t anymore. The first trailer of Alia Bhatt, Aditya Roy Kapur, and Sanjay Dutt starrer Sadak 2 released yesterday. In less than 24 hours, the trailer has over five million ‘dislikes’.

Related: Dil Bechara Trailer Is The Most Liked Trailer On YouTube: What Does That Say About Us? 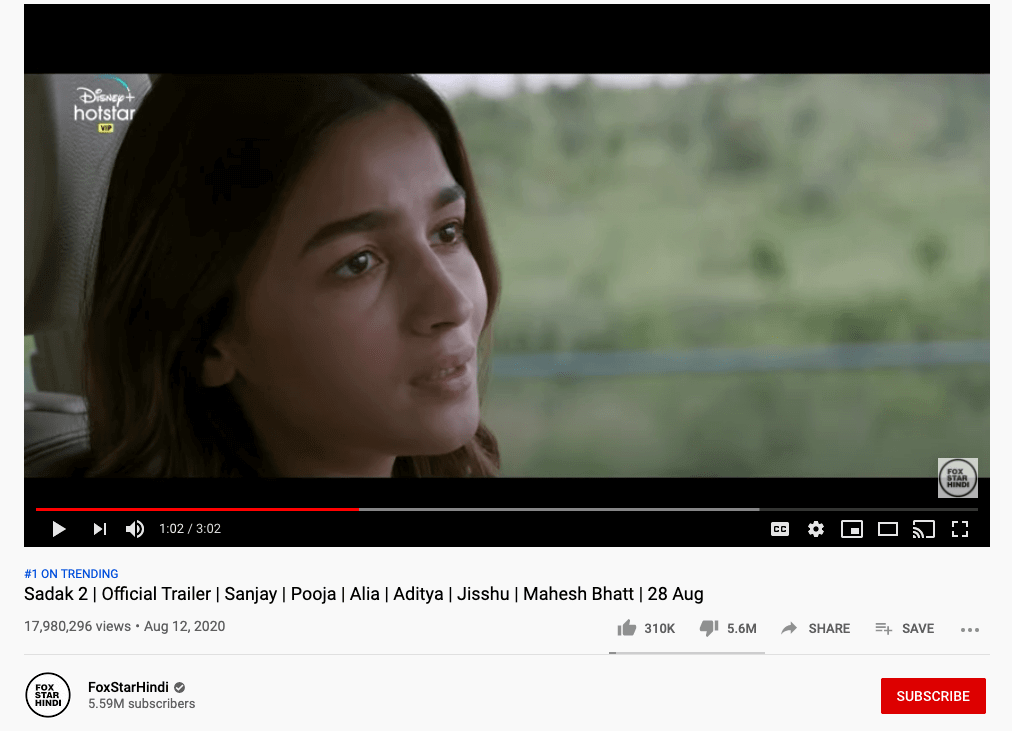 Why does #JusticeForSSR mean pulling other actors down?

Millions are joining in the #JusticeforSSR campaign to find out the circumstances that led to his demise. Personally, I feel this is a very positive sign to see our population coming together to get justice for one person. But my problem is with the mob mentality. Anyone who has been following the case closely will know what I am talking about. There is a constant shift in focus and narratives that jumped from nepotism to now the alleged money laundering and more. But in this entire campaign, is the reaction to Sadak 2 justified? How does pulling down another actor bring justice for Sushant? And it’s not just Sadak 2. Other films, like Janhvi Kapoor’s Gunjan Saxena: The Kargil Girl, are getting similar reactions. And it wasn’t terrible, as popular opinion about the film would have you believe. Here’s our review of it.

Where were these so-called warriors for justice when Sushant Singh Rajput’s movies were released on the big screen? Where were they when he was still alive? If SSR was really that loved by all these people on social media, how is it that only two of his films went above the 100-crore mark?

We should know better than to boycott things out of hatred

Congratulations to people for creating a history. Film #Sadak2Sadakchhap trailer got 50 lakhs dislikes and become the most hated film trailer in the history of entire world. Now this film should be called #SadakThoo instead of #Sadak2! And entire Bhatt family should leave bollywd

The problem with the digital age today is that one thought can ignite an entire mob to follow. Logic and reason has nothing to do with it. This justice campaign for SSR cannot be an effort to invalidate the months and years of hard work that any other actor has put into their careers.

Are nepotistic favours justified? Absolutely not. But should it define everyone else as talentless? Hell, no! Actors like Kareena Kapoor Khan, Ranbir Kapoor, and Alia Bhatt are undoubtedly products of nepotism, but that doesn’t take their talent away from them. Our support for someone should not strip others of their rightful credit.

Sushant Singh Rajput’s death has caused pain to a lot of us and many are still grappling with how it could’ve happened, including me. But aren’t we causing so many actors more mental trauma by boycotting their projects?

What’s happening with Sadak 2 is a clear case of mob mentality and nasty digital propaganda. We won’t have a nepotism problem in the entertainment industry if we, as audiences, know when to give due credit. We should be able to let talent shine when it deserves to shine.

Let’s not be an angry mob; let’s try to be a positive force of support for talent irrespective of who the Daddy is or isn’t.

Best Retinol Products In India: 11 Creams And Serums To Try In Your Skincare Routine