What is consent? Is it saying yes to any kind of sexual activity? Is it simply the lack of a no? Or is it a much bigger concept which involves complete free will when faced with a sexual proposition? This isn’t a topic you’d normally expect Bollywood to do any justice to, despite the extremely on-point Pink, but this week’s release, Section 375, has a crack at it. Does it succeed? Spoiler alert: no.

Consider this series of events. An extremely famous Bollywood film director sees a junior costume assistant on his set. A few days later, he arrives at the set at 4 am and asks her to tell the spot boy to bring him coffee in his trailer. Since there’s no one on set this early, she brings it to him. He thinks this means that she likes him. He tries to forcibly kiss her. She indicates that she doesn’t want to, but he does it anyway. He knows that she has aspirations of being a costume designer, so he starts doing things to help her with her career. He makes her the costume designer for his next film. This is all in return for her having sex with him, as he mentions later. We also learn that he does this with another subordinate—an actress in his film.

One day, there is an encounter which she says isn’t consensual. She goes to the police and files an FIR. There’s a lot of damning forensic evidence against him which results in his conviction. His wife hires a renowned lawyer for the appeal, which becomes more ludicrous with each argument he (the lawyer) makes. First, he claims there was no intercourse. Then, he claims it was consensual. 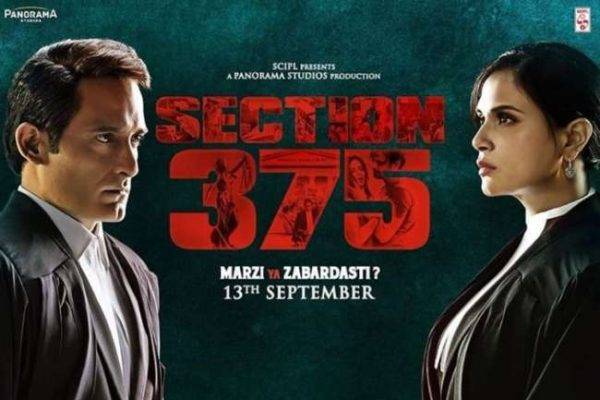 The evidence suggests that the alleged rape took place in the span of 22 minutes, so this lawyer argues that the jeans the victim was wearing was too tight to forcibly remove and then put back on later within 22 minutes. He actually “demonstrates” this by getting someone other than the victim to put on the jeans over her slacks in the middle of the courtroom and then claims this is hard evidence. The prosecution doesn’t object; neither do the judges. The implication is that this is a good argument.

He then claims in the courtroom that he has CCTV footage from inside the director’s trailer from a few days before the rape that shows them having consensual sex. The victim says “rukiye” when he’s about to play it as if she’s afraid of what it’ll reveal. Just the idea of there being a camera inside a celebrity’s trailer is preposterous, but for some reason, this tactic scares her. What’s more bizarre is that the lawyer thinks her saying “rukiye” is tantamount to confessing that her complaint is false!

Finally, the lawyer and the director decide to confess everything to the court. The confession makes it crystal clear that the accused used his position of power over the victim to implicitly coerce her into having sex with him. According to the Indian Penal Code, this is rape because both will and consent of the woman is required for any intercourse to be consensual, which the prosecutor argues as well. But even then, the film ends with the prosecutor admitting that “justice wasn’t done” when the accused was convicted.

We’re supposed to walk away with the idea that the law is wrong for saying that anything against the “will and consent” of a woman is rape. We’re supposed to believe that as long as the woman says yes in that given moment, no matter what the implication for saying no is, the man should not be held accountable.

Section 375 comes a full two years after America’s Me Too and a year after India’s. Both movements highlighted how using one’s power to coerce subordinates into sexual intercourse amounts to sexual assault, an idea that the Indian Penal Code recognises. And yet, the film’s take on consent hasn’t moved beyond that of Tere Naam’s, a film which showed Radhe (Salman Khan) kidnapping and confining the woman he “loves” for saying no and threatening to beat her, which results in her changing her mind under duress. The film saw Radhe as the hero and a victim for being turned down by a woman he claims to love after he repeatedly impresses upon her that he’s much more powerful than her. Eventually, it is this show of power that leads her to say yes.

Bollywood has a history of not being able to understand consent and sexual assault, given that extremely privileged and patriarchal men run the industry. It’s visible in lyrics like “Tu haan kar ya na kar, tu hai meri, Kiran” and the glorification of stalking and harassment as natural stages of courtship. Films like Ranjhanaa have tried to say that loving someone a lot is a legitimate reason for them to want to be with you.

While society is also progressing slowly, it seems that on matters of gender, sex crimes, and consent, Bollywood isn’t moving forward at all. Even as films like Section 375—that look slick and sophisticated on the surface—are being made, their primary thrust remains as regressive as it did 20 years ago. For now, we’ll have to simply look to Pink as the only mainstream Bollywood film that understood consent.

Your Horoscope For July 27 – August 2: Relationships, Work, Life, And Everything In Between