October 27, 2020, marks an important event for the fans of Shah Rukh Khan — it is the 20th anniversary of the “iconic” film Mohabbatein. So yes, an eternity ago, I started watching it to see what the hype was all about. I was just eight years old when this film released and, thankfully, I hadn’t even been introduced to the world of cinema at the time. So, as Mohabbatein turns 20, I decided to mark the event and watch the film. Let me just say…What. The. Actual. Fuck!

I don’t need to get into the story because I’m sure you’ve gone through the horror at some point in your life. If you haven’t, well…how lucky are you! So, I’m just going to talk, or rather rant, about some of the things that left me confused.

A fact as random as the above sequence in the film: Mohabbatein isn’t the only one turning 20 in 2020… There are many Aryans celebrating their 20th birthday this year too.

Let’s start with Gurukul. Am I the only one who feels that building was the same building as K3G waala ghar? No? Just me? Anyway, for a major part of the film, I wasn’t even sure if this Gurukul was a school or a college. They were dressed like schoolboys but certainly didn’t have any classes or teachers for that matter. There was just Principal Narayan Shankar, dressed like Professor Snape, who was literally everywhere with his ‘thou shalt not love’ motto. And then, Cupid puked out his offspring in the form of Raj Aryan Malhotra, a man who wore a bracelet with his own name and had a sweater stitched to his shoulders. I mean, seriously, HOW DID THAT SWEATER NOT FALL OFF? Itna straight chalna toh Miss India grooming classes mein bhi nahi sikhaate honge.

As someone who is not a fan of the Johars and Chopras, this film really didn’t help change my mind. I mean, 2,000 songs later, I still don’t know what this movie or its songs tried to show. Raj Aryan’s birthday party looked like a Valentine’s Day party; Valentine’s Day, on the other hand, looked more like Diwali. The girl who shows up to a pool party in a pool party-appropriate dress suddenly feels lajjit when she’s pushed into the pool. Gurukul is set up in such a unique part of India jahaan all year, Autumn rehta hai.

Someone once said aap chronology samajhiye. Honestly, nahi aayi samajh! In one year at Gurukul — I’m guessing it was a year because there were no exams — there was Rose Day, then Holi, and then Valentine’s Day!

There is just so much about Mohabbatein that makes me question everyone who said this film is one of the best. There’s a song with the lyrics, “Pairon mein bandhan hai, payal ne machaaya shor, sab darwaaze karlo band, dekho aaye aaye chor”. After this, how on earth do we still have the audacity to laugh at Rihanna for ‘work work work work work‘?

Jahaan tak nepotism ka sawaal hai, I am so glad Kangana hadn’t entered the industry in 2000. I’m pretty sure she would’ve lost her mind seeing Uday Chopra and Shamita Shetty in Mohabbatein. Every scene with Uday Chopra and his ‘hey guys’ had me ask why? Shamita Shetty, on the other hand, concerned me. Her orgasmic huffing when caught stealing apples was on another level. Kim Sharma’s voice is still screeching in my head, and I can’t seem to turn it off. Her ‘Sameer, zara mujhe apni baahon mein le lo‘ gave me a chest burn. Preeti Jhangiani would sing the best lullabies because every time she spoke, I literally nodded off. And Jimmy Shergil was the worst advocate for friendship. He had the worst understanding of dosti. “Dosti ka pehela usool hai, dost kuchh bhi maang le, usse inkaar nahi kiya jaata.” This is exactly how people bully each other in the name of dosti.

Now I know why my generation had the grumpiest students. We were shown movies like Mohabbatein where there are no classes, just romance and aerobics/dance, and wars between teachers. While in reality, we got a snoozefest in the name of classes and FLAMES in the name of peak romance. We can’t get enough degrees today to secure a decent job, but Mr Raj Aryan, who was banished from the grounds of Gurukul and then found no open doors, comes back to teach and is also promoted to Principal.

Anyway, the ending did bring me back to K3G because this scene seems awfully familiar. 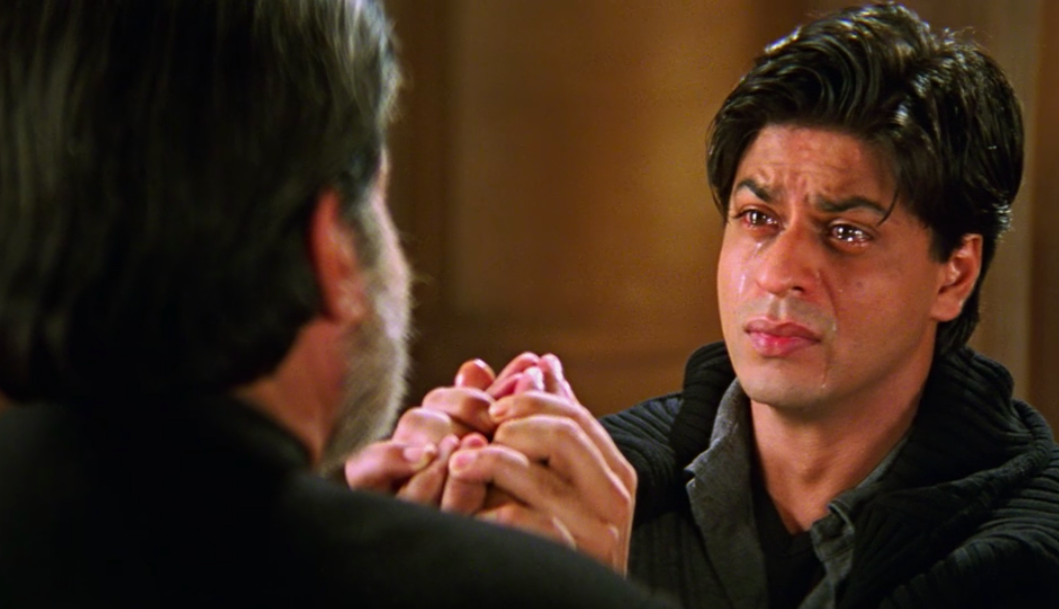 This film has killed my will to write. I can almost feel it — keeping up with the whole ’20 in 2020′ tradition is going to be a pain. As Narayan Shankar rightly said, ‘Har kaamyaabi ke peechhe ek bohot bada balidaan hota hai.‘ Satya vachan. My kaamyaabi was finishing this article, and my balidaan was my sanity that I lost while watching Mohabbatein.

Related: 25 Years Of DDLJ: The Film We Love To Hate…And Hate To Love