Does the belief that “women can have it all” demand too high a price from Indian women? Is the situation for middle-class Indian women really as improved as the data on paper would have us believe?

These are some of the key issues that author Nilanjana Bhowmick focuses on in her latest book Lies Our Mothers Told Us: The Indian Woman’s Burden. Through the stories in this book, the author goes beyond the numbers presented to us about the lives of Indian women and speaks to real women on the ground. For example, after the Right To Education, people sitting comfortably in their urban living rooms would believe that every girl, in urban and rural India, now has the same access to education and opportunities as her brothers. But, on the ground, the situation is very different. Girls still carry the load of housework and are expected to support their mothers. They still have to prove their worth in domestic chores because marriage is considered the ultimate goal for them. Even after all the improvements on paper, girls still get left behind in school. After all, how much can you expect a child to focus on schoolwork when they are already exhausted before school begins?

The situation is not much better for middle-class women in urban India either. The author spoke to several women aged 15 to 60, from homemakers, teachers, and counsellors, to retired professionals, therapists, and entrepreneurs. According to the author, the levels of education varied among her subjects as well. While some were highly educated, there were other women she spoke to who were barely educated. But the one thing that all of them had in common was that they were middle-class Indian women struggling with having it all and giving their all at the same time. 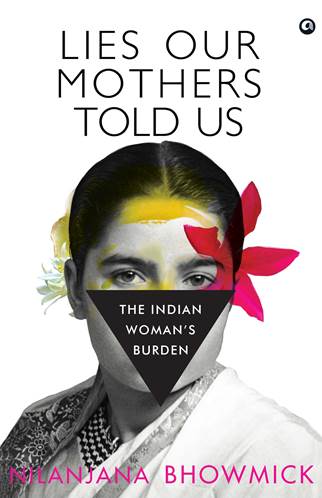 This book will make you, the urban Indian woman, look at your own situation. Through anecdotes, both personal and otherwise, Bhowmick talks about the struggle that middle-class Indian women face on a daily basis. A struggle that we don’t discuss openly and murmur about under our breaths while cleaning the house.

As modern, educated women, we are expected to have flourishing careers but, because we are women, we are also expected to be the primary housekeeper, cook, and caregiver at home. Because how can a woman be just one thing? She has to do it all. She has to be a good wife, a good daughter, a good mother while also holding down a job. And if it’s all getting too much, no one offers to take on the bulk of the housework. The one common solution that is offered to a burnt-out woman is to give up her job. If the husband is earning, why does she need to work? Personal fulfilment be damned.

Lies Our Mothers Told Us: The Indian Woman’s Burden is a heavy read. It’s not one of those books that will lull you into a comfortable slumber at night. It’s a book that will make you think and, hopefully, start an uncomfortable conversation at home.

Published by Aleph Book Company, Lies Our Mothers Told Us: The Indian Woman’s Burden is now available online and in bookstores near you.

About the author: Nilanjana Bhowmick has been a journalist for more than 21 years and has won three international awards for her reports on gender and development. She began her career as a producer for the BBC Asian Network in Birmingham and The World Today, the flagship current affairs programme of the BBC World Service Radio based in London. She was the correspondent for TIME magazine’s South Asia bureau in New Delhi. She has written for the Washington Post, Al Jazeera, and National Geographic Magazine. Her non-fiction work, poetry, and short stories have appeared in several international anthologies.

Related: 8 Books Written By Women That Should Be On Your Bookshelf