The Forest Of Enchantments: Sita Rewrites The Ramayana To Tell Her Own Story

When Chitra Banerjee Divakaruni wrote A Palace of Illusions in 2008, everyone was entranced by her retelling of Draupadi’s story, one that came from her point of view. Was it any surprise then that she chose to do a retelling of The Ramayana, and that too, Sita’s version, and call it The Forest of Enchantments? It’s one of the greatest epics ever told, but Divakaruni chooses to set her story squarely within the women who are often misunderstood and relegated to the margins–Kaikeyi, Surpanakha, Mandodari. Duty, betrayal, infidelity and honour form the major crux of her story, but within it, Divakaruni deftly weaves in a woman’s struggle to retain her autonomy in a world of men, a feeling many can identify with even today. 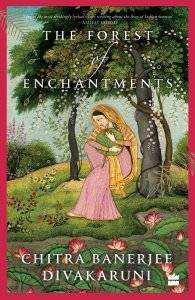 Read an excerpt from The Forest of Enchantments here:

I had come to Valmiki’s hermitage having lost everything except the babies I carried inside me. I was forever in his debt for the refuge he’d given me at that most crucial moment.

I glanced down at the palm leaves in my arms, a hefty stack, reaching higher than my heart. A shudder went through me, sorrow and longing and fury and love, as I saw the title: Ramayana. The story of the glorious king Ram. My husband.

I stayed up through the night and the next night in my thatched hut at the edge of the ashram, reading. The oil in the lamps burned away without my noticing. In the next room, my fourteen-year-old sons awoke at the smell of scorched wicks and came to ensure that I was safe.

Lav, always protective of me, took me by the shoulders and said, ‘You must sleep, or you’ll make yourself ill. What’s so urgent that it can’t wait until morning?’

But Kush, the perceptive one, touched the dried salt on my cheek with a gentle finger and said, wonderingly (for it had been years since they’d seen me so distraught), ‘Ma, why are you weeping?’ I kissed their heads, my boys balanced on the precarious edge of manhood, and sent them back to their beds with words of assurance, but I didn’t lie down. Morning came. Wind whispered in the trees—mango, coconut, jackfruit—that I had planted around the edges of the ashram in the early years, when I needed work to distract me from my grief. On the riverbank, I heard the voices of the ashram dwellers greeting the sun with prayer. The purest notes were those of my sons, for they were adept at both weaponry and song. I waited until the assembly was dispersed, each to his or her task, and then I took the manuscript back to Valmiki.

The sage looked at me, curious.

‘It’s very good,’ I said. ‘The poetry is superb, the descriptions sublime, the rhythm perfect. You’ve captured the histories of earth and heaven both, the adventures and the wars, the weddings and the deaths, the betrayals and the farewells, the palace and the forest.’

‘But,’ I said, and I couldn’t keep the anger from my voice, ‘what occurred when I was alone in the darkness, under the sorrow tree, you don’t know. You don’t know my despair. You don’t even know my exhilaration, how it felt—first in the forest and then in Ayodhya—when I was the most beloved woman in creation.’

‘I wrote what the divine vision showed me,’ he said.

‘It must have been a god that brought it to you, then, and not a goddess,’ I said drily. ‘For you haven’t understood a woman’s life, the heartbreak at the core of her joys, her unexpected alliances and desires, her negotiations where, in the hope of keeping one treasure safe, she must give up another.’

I expected anger, for he’d lavished a lifetime on this book. But not for nothing is he called maharshi, great sage.

‘You must write that story yourself, Ma,’ he said, ‘for only you know it.’

He took out a new sheaf of the pounded leaves, a set of quills—items precious and hard to come by in our forest retreat. He called to an apprentice to carry his writing table to my room. He rummaged in a chest and handed me a sealed bottle of ink.

I walked to my room, shaky with possibility and trepidation. Time was, indeed, short. All these years my husband—yes, to my chagrin I still thought of him as such—had left me alone to raise my sons, allowing me, if not happiness, at least a tenuous peace. But now the planets were shifting. Everything was about to change again.

I barred the door and sat cross-legged on the ground, and arranged the palm leaves on the table. Outside, I could hear Valmiki teaching my sons how to sing the epic, where to raise their sweet silver voices in affirmation, where to whisper dark and shiveringly of the treachery of rakshasas, of human failings. They’d be performing it soon, if his vision was true—and I both feared and hoped that it was—in front of Ram, King of Ayodhya, the father they’d never met. The man who had banished them to the forest for no fault of their own even before they were born. If Valmiki’s vision was true, soon I, too, would be facing him. Ram: monarch, father, warrior, husband. The beloved who abandoned me when I needed him most. My greatest joy and my greatest despair.

But I had a task to complete before that. I took a deep breath and touched the first palm leaf to my forehead, invoking Saraswati, goddess of creativity serene on her white swan, though a part of me wondered what she could know of my very human tribulations.

I unplugged the inkpot and was startled to see the colour the sage had chosen for me. Red. But of course. How else could I write my story except in the colour of menstruation and childbirth, the colour of the marriage mark that changes women’s lives, the colour of the flowers of the Ashoka tree under which I had spent my years of captivity in
the palace of the demon king?

I picked up the quill and closed my eyes. I knew what I must do: travel back to the beginning, to the moment I met Ram.

The selected portion has been excerpted from The Forest of Enchantments, published by HarperCollins India.

Chitra Banerjee Divakaruni is an award-winning and bestselling author, poet, activist and teacher of writing. Her work has been published widely, in magazines and anthologies, and her books have been translated into twenty-nine languages. Several of her works have been made into films and plays.

You can buy The Forest of Enchantments here.