In school, we were constantly taught about one of the biggest strengths of India — unity in diversity. India is a secular country, and our identity comes directly from celebrating the diversity in our country, be it in regions or religions. There is no other country like ours in the world. A rapidly increasing number of people, however, now feel otherwise. They think that only one religion should dominate over every other religion in India and that there should be no interaction between the majority religion and a particular minority. Sounds ridiculous, right? 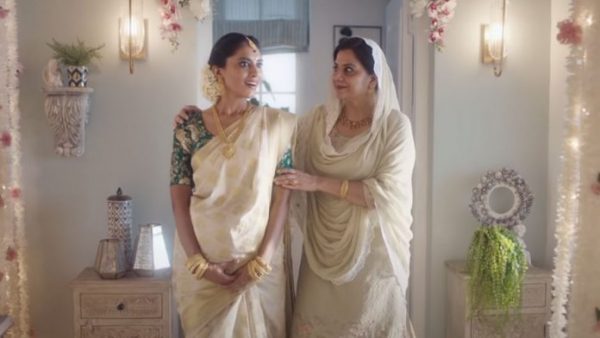 It is this bigoted, hateful thinking that has forced jewellery brand Tanishq to withdraw a recent ad which showed a Hindu woman married into a Muslim family. Firstly, the ad is beautiful. It begins with a pregnant woman and an older woman walking into a house which is being prepped for a celebration. The younger pregnant woman is Hindu and the older woman is Muslim, this is made apparent by their attire. In the following shots, we see that this celebration is a surprise baby shower for the Hindu woman and is hosted by her mother-in-law, the older Muslim woman. To drive the point home, the daughter-in-law asks her mother-in-law, “Maa, yeh rasam toh aapke ghar mein hoti bhi nahi hai na?” Her mother-in-law replies, “Par bitiya ko khush rakhne ki rasam toh har ghar mein hoti hai na“.

Thank you for making us notice the beautiful #tanishq ad dear trolls ! pic.twitter.com/Wev3VSaiCw

There is nothing wrong with the ad. In fact, it’s quite sweet and gives an important message. Sadly but unsurprisingly, this ad attracted vile hatred from trolls and bigots who said it promotes “love jihad“. While the more reasonable voices have hit back against the trolling, Tanishq has now withdrawn the ad and taken it off YouTube.

This is what we have come to as a nation. Unity in diversity seems like a faraway dream now, not a lesson that was once taught to us in school. This was only a jewellery ad, the main motive here is to sell expensive jewellery. Some trolls have also said that it shows a scared Hindu woman too frightened to practise her own traditions and is at the mercy of her in-laws. It takes a rather sick mind to interpret this ad in such a hateful manner.

The concept wasn’t as much a problem as the execution was,the fearful Hindu girl apologetically expressing her gratitude to her in-laws for the acceptance of her faith, Isn’t she the woman of the house? Why is she at their mercy? Why so meek and timid in her own house? Shameful. https://t.co/LDRC8HyHYI

Idiots saying Tanishq should do a reverse ad, change the religions and see what happens. Ok. So the storyline will show a Muslim Bride in Hindu Family, and entire Hindu Family following Islamic Traditions and Customs? The meltdown of the same people would have been even more

As one Twitter user aptly said, India’s biggest problem is not the virus, it’s far more serious than that.

LOL, we live in a time when an ad is withdrawn for literally *promoting* communal harmony. And we think COVID-19 is India’s deadliest virus right now. #Tanishq

TBH, reacting to paid twitter trends and manufactured outrage is just myopic. The ad was lovely. Standing by it would have made ’em cooler, foresighted and balsy. But alas. #tanishq https://t.co/A3b9FuxcHg

Review of Evil Eye And Nocturne, The Next Two Thrillers In 'Welcome To The Blumhouse'

Your Horoscope For Oct 26 – Nov 1: Relationships, Work, Life, And Everything In Between

Review of Evil Eye And Nocturne, The Next Two Thrillers In 'Welcome To The Blumhouse'