While the world is uniting to stand in support of the Black Lives Matter movement, parents in India are still searching for a ‘fair’ bride for their sons. Matrimonial websites in India often have new applicants select their ‘skin tone’ while signing up for a profile. Based on the selection, the applicant’s profile is then presented in searches that include their skin tone as a preference. This concept of colourism is not new in India. For years, Indian women have been subjected to ridicule based on how fair they ‘should be’ to be ‘worthy of marriage to a good prospect’. Things have, however, changed for Shaadi.com – all with an online petition. 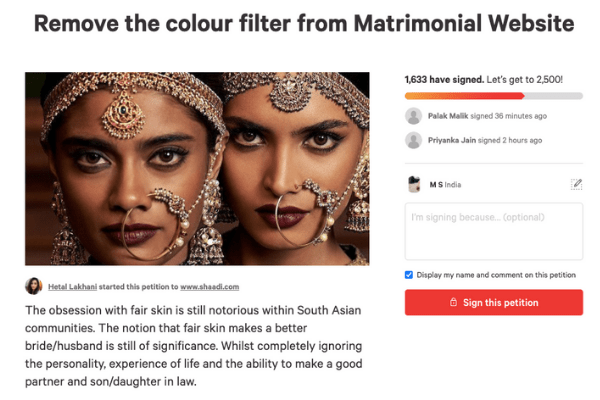 Hetal Lakhani, from Dallas, USA, started an online petition to remove one such filter from a popular matrimonial website – Shaadi.com. Hetal, along with Meghan Nagpal, a Facebook group member, had previously reached out to the website regarding the same. Shaadi.com responded by calling it a “product debris” they missed removing from the site. The company further added that the filter was not serving any purpose and didn’t actually segregate profiles based on its responses. Hetal started an online petition to have the filter removed, and interestingly, her petition received over 1,500 signatures within 24 hours! As a result, the filter was removed from the Shaadi.com website overnight.

“It’s just one small step in an ultimate goal of promoting equality within the south Asian community on a global level,” said Meghan, as quoted by BBC.

Colourism in India: Our deep-rooted nonsense

Colourism is a part of the deep-rooted practice of discrimination in Indian societies. A fair woman is not only seen as a beautiful person but is somehow also perceived as being intelligent. Whereas, a woman with a darker complexion is often subjected to discrimination, irrespective of her qualifications or social standing. Many fairness creams in India, too, promote their products through ridiculous advertisements showing women becoming confident and even getting jobs because of ‘14 din mein gora nikhaar.’