Actor Sushant Singh Rajput’s team on Tuesday launched his dream project — selfmusing.com — as a digital home for his thoughts. His team broke the news on his official Facebook page on June 16 while addressing his fans as his ‘real godfather.’ The post further added that the website would be “a collection of all his thoughts, learnings, dreams, and wishes he always wanted people to know.”

A home for SSR’s beautiful quotes

The website is still under development and only has a landing page for now. The special part about this is that it shows a fresh quote by Sushant every time the page is refreshed. The landing page also has a brief bio about the actor:

Sushant Singh Rajput was an Indian actor, dancer, entrepreneur, and philanthropist. #SelfMusing was his passion. As promised to him, this is a space having all his thoughts, learnings, and wishes he always wanted people to know. We are in the process of documenting all the positive energies he has left behind in this world. Bollywood is just 20% of Sushant, using this space, we will try our best to finish his book. This space will ensure that he is #AlwaysAlive with us & give positive inspiration to his “Godfathers,” Aka You. 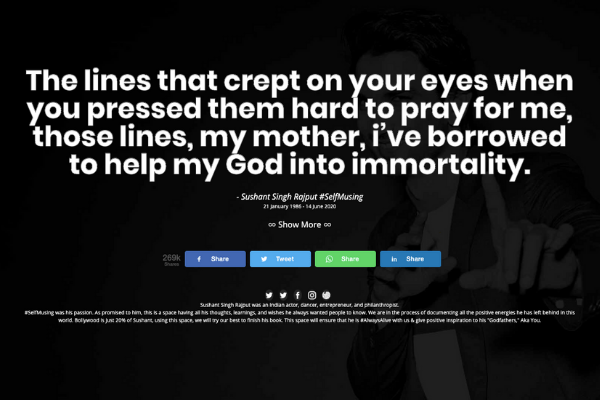 Sushant Singh Rajput is best known for his role as MS Dhoni in the cricketer’s biopic. The actor passed away on Sunday, June 14, at his Mumbai residence. According to reports, he died by suicide.

Mystery, Thriller, Drama, And More: 10 Books That You Won't Be Able To Put Down

Endometriosis: A Disorder That Affects 25 Million Women In India But Remains Underdiagnosed

Endometriosis: A Disorder That Affects 25 Million Women In India But Remains Underdiagnosed

Switching To Silicone Hydrogel Contact Lenses? Here’s What You Need To Know