January 4, 2021, was a big day for actor Richa Chadha as she unveiled the poster of her latest film Madam Chief Minister. She tweeted, “Glad to present to you all, my new movie #MadamChiefMinister, a political drama about an ‘untouchable’ who hustles and makes it big in life! Out in cinemas on 22nd January! Stay tuned!”

However, as soon as the poster was unveiled, a problem obviously unforeseen by the makers of the film marred their celebrations. The poster has Richa holding a broom and wearing torn clothes, which sparked debates around Bollywood and casual casteism. Soon, there were tweets that displayed the general disgust around the Madam Chief Minister poster. Read on to know why. 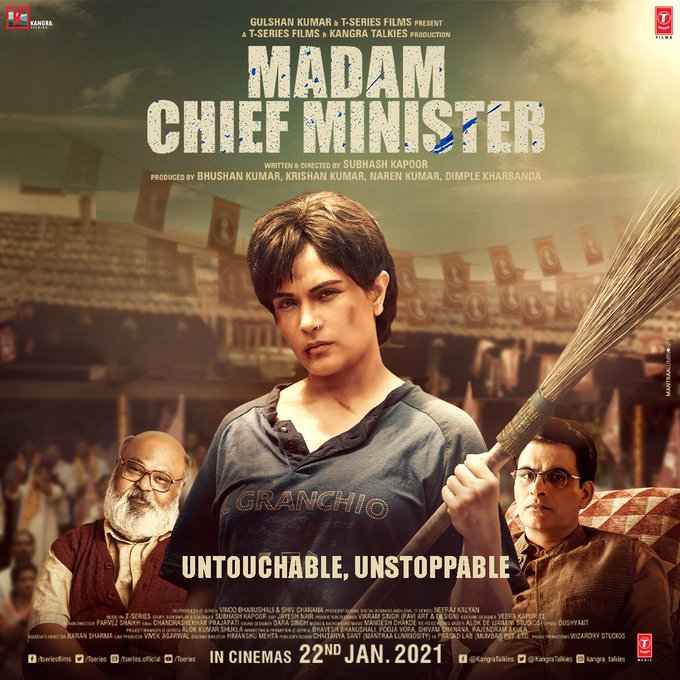 The film, reportedly based on the life of former Uttar Pradesh chief minister Mayawati, releases on January 22, but it is already being talked about fervently.

“What does a Dalit leader going on to become CM have to do with holding a broom?”

Over the years, Bollywood in the guise of breaking caste barriers and making progressive cinema has furthered caste prejudices and solidified symbols associated with discrimination.
What does a Dalit leader going on to become CM have to do with holding broom?#MadamChiefMinister https://t.co/43ela4S78A

Of course. How do we tell that the protagonist is a Dalit woman ? Give her a broom because that’s what Dalits really do. Bhangi, Chamaron ka or kya kaam ? https://t.co/I7mCscMtRG

“Dalits used to have a broom attached to their backsides so they wouldn’t pollute the land they were walking on.”

To people who don’t find this problematic: Dalits used to have a broom attached to their backsides so they wouldn’t pollute the land they were walking on. @RichaChadha it’s casteist to give Mayawati a broom. She was a teacher, respect Behenji how you respect your Savarna leaders. https://t.co/OBtdoX87Ag

These posters are all about the difference between the portrayal of Dalit Resistance when a movie is made by a Savarna and a Dalit.

Some people even questioned the factual integrity of the film, if it was, in fact, about Mayawati’s rise to power. Far from the imagery of the poster, Mayawati was a teacher before she joined Kanshi Ram’s Bahujan Samaj Party.

“Is this meant to be about Mayawati? Why is she holding a broom?”

When did Mayawati wear torn clothes or carry a broom? You use the word “untouchable” but the film’s cast is Chadha, Shukla, Kaul & Oberoi. This is like making a film about slavery and only feature whites. Why can’t you reach out to Dalits regarding how we are portrayed? Shameful! https://t.co/OBtdoX87Ag

“Why broom instead of a pen?”

Besides the highly casteist vocabulary, the poster shows how bad research is done in the making of this movie.
Why broom instead of pen?
When did Mayawatiji ever wear casual T-shirt or a nose ring (she always had nose pin) ?? #MadamChiefMinister pic.twitter.com/s3Gf7dszPs

All the best for your role. I am a big fan of you.
But what does that broom mean?
Behen ji never hold in her entire political carrier.
If this represents the state of untouchability, producer has to increase his knowledge.

Here’s how Richa Chadha responded to the criticism.

Had no idea I was being actively cancelled. LOL. Life outside twitterverse! Did a double take at accusations of glamour.
Thing is, from the perspective of the film industry ⬇️is the most “deglam look”. It’s also a still, (as in not from a photo-shoot, but a shot from a scene) https://t.co/XrtVXA0r3q

Am so sorry to have failed your woke agni-pariksha. Sorry to disappoint you, that me of all people can disagree with you on certain aspects of cancel-culture. Again, watch the film or at least the trailer? For we do become what we hate quite easily sometimes… https://t.co/lyNqGP3ZaZ

She even responded to an open threat…

Praises from the film fraternity

The poster release, however, had several people from the film industry going all out to show their support for the film. Many even congratulated Richa Chadha for picking a bold role.

Cannot wait for the trailer to hit .. this is big!! 🤍🤍🤍🤍🤍 #MadamChiefMinister https://t.co/gVK2INqoSs

After the humongous success of #Shakeela which released during Christmas 2020, Richa Chaddha is coming up with another film #MadamChiefMinister on Republic Day weekend 2021 .. expecting many records to be shattered. 👍👍👍 pic.twitter.com/JQ9gEVxqTI

Go for it 👏🏼 looking forward to watching this one 🙂 https://t.co/shdpPIK08z

What’s your take on the Madam Chief Minister poster? Tweet to us at @allabouteve_in.

Related: Caste-Based Violence And More: 12 Accounts To Follow To Know More About Dalit Voices In India

Healthy And Almost Dessert-Like: 8 Yogurt Recipes For A Gut-Friendly And Refreshing Breakfast

Bollywood Fashion 101: How To Look Like A Pataka At Your BFF's Wedding In Dilli Ki Sardi

Bollywood Fashion 101: How To Look Like A Pataka At Your BFF's Wedding In Dilli Ki Sardi