Nothing To Lose: Ma Anand Sheela’s Captivating Journey From Disciple To Queen

Ma Anand Sheela has been a captivating figure for decades now, and more so since the release of Wild Wild Country on Netflix. The documentary series, which showed the rise of fall of Osho, also focused on Sheela’s vital role in the story. From being a disciple to rising up the ranks as the uncrowned queen of Rajneeshpuram and her alleged involvement in the largest bioterror attack in American history, Sheela’s journey continues to be fascinating, to say the least. And her story is now being presented to the world through an authorised biography titled Nothing To Lose. 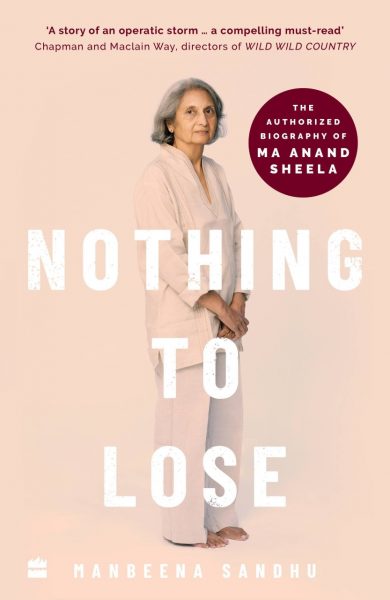 Author Manbeena Sandhu followed the Osho movement for two decades before her journey finally led her to Sheela. Nothing to Lose is a no-holds-barred account of Sheela’s life, her intense relationship with godman Rajneesh, and what actually happened behind the closed doors of the ashram.

Who is the woman beyond the persona of the commune leader? What is Sheela like behind the sensational ‘tough titties’ avatar? Here is an excerpt from the book:

“Sheela was once again startled out of her reverie by Laxmi’s shrill voice, ‘Come on in!’ Laxmi waved to them, ‘Lucky you …’ she grinned broadly, ‘Bhagwan wants to see you both. You are welcome to walk into his bedroom,’ she pointed the way to Bhagwan’s chamber.

With a racing pulse, Sheela scurried towards the room and Bapuji followed behind her. She pulled the handle of the door that was left slightly ajar and entered. The forty-one-year-old Bhagwan was comfortably seated on an armchair in one corner of the room, with legs crossed at the knees. He wore a white lungi that was tied at the waist and his chest was bare and covered with a light tuft of hair. The gentle sea breeze that blew from the window behind him stroked the thin strands of his sparse blackish-grey hair that fell sparingly on the sides, and his wispy beard justified the wisdom his deep dark eyes reflected. A beatific smile was spread across his face and his penetrating gaze pierced Sheela’s soul; who stood rather feebly and shakily at the door in a completely vulnerable state, waiting to fall into Bhagwan’s arms.

As if able to read Sheela’s mind, Bhagwan opened his arms wide and offered a hug. ‘Come to me …’ he whispered, and his hypnotic gaze pulled Sheela towards him. Sheela tottered towards Bhagwan, fell to her knees and dived into his inviting arms, losing herself to him in a complete state of surrender.

Bhagwan held her lovingly to his chest. Sheela held him tightly like an errant, lost child who had suddenly found home. The world around Sheela disappeared; she herself disappeared along with Bhagwan as oneness into the universe that was now throbbing with their unified heartbeat. Sheela experienced eternity in that one fleeting moment and she did not want to open her eyes or separate herself from Bhagwan—ever again!

Bhagwan let go of Sheela gently, held her hands and looked deep into her eyes. Bhagwan shifted his gaze to Sheela’s father who stood silently in an enraptured state with folded palms. Bhagwan gestured for him to sit beside him on the carpeted floor. Sheela unwillingly pulled herself away from Bhagwan and sat with her back leaned against the wall. Bhagwan and Sheela’s father engaged in a conversation that sounded incoherent to Sheela—she only came back to reality when Bhagwan tilted his head, focused his gaze on her and said, ‘Sheela, come again in the evening for my lecture. I will wait for you,’ his eyes twinkled as he spoke.

Sheela’s face lit up—Bhagwan was reciprocating her longing and love. Sheela rose up and stood self-consciously before Bhagwan. She was aware that Bhagwan was seeing right through her. She was an open book and Bhagwan seemed to be reading every word out loud to her. Her nerves resurfaced and she found herself fidgeting as she tucked an unruly tendril of her shoulder length hair behind her ear and nodded … It took her a few moments to recover her lost voice and finally she murmured softly,

Sheela and Bapuji returned to the cousin’s home where they had been staying put for the duration of their stay in Bombay.

They seated themselves in the veranda. Sheela glanced at her watch, what a long day it had been though, she reflected. Sheela had been up since 4 a.m. that morning Sheela and Bapuji had travelled from Baroda all the way to Bombay. The two had even met Bhagwan and yet the clocks seemed to be ticking so slowly, as if not moving at all. Despite all this, surprisingly enough Sheela was not in the least bit tired. Sheela couldn’t wait for the sun to set behind the tall coconut palms that were swaying in the fresh breeze, and the sky to turn pinkish-purple so that she could make her way into Bhagwan’s mystical world again at 7 p.m.”

If you want to win a free copy of Nothing To Lose, participate in our giveaway now! Here is everything you need to know to win:

#GiveawayAlert: From heading an ashram at Rajneeshpuram, Oregon, USA, in the 1980s to allegedly spearheading what is known as the largest bioterror attack in American history and spending thirty-nine months in prison, Ma Anand Sheela’s life is one that fascinates and intrigues. ⠀ .⠀ And this Diwali, we’re giving away 5 copies of Nothing To Lose, Manbeena Sandhu’s no-holds-barred account of Sheela’s life, her intense relationship with Bhagwan, and the riveting story of what actually happened behind the closed doors of the cult’s ashram.⠀ .⠀ To win a copy, answer the question, “What would you ask Ma Anand Sheela if you met her today?” Contest ends on 10th November!⠀ 5 copies up for grabs!⠀ .⠀ And to read an excerpt from the book, click on this image at the link in our bio!⠀ .⠀ .⠀ .⠀ .⠀ .⠀ .⠀ .⠀ .⠀ .⠀ #giveaway #bookstagram #books #literature #manandsheela #bookgiveaway #contest #contestalert

Manbeena Sandhu is based in Toronto, Canada. In addition to being a writer, she works as an addictions counsellor with the community in Canada. Her first book, Layla in the Sky with Diamonds, is a work of fiction. This is her first foray into non-fiction.

Miss India Review: A Tasteless Milky Chai That No One Wants

Crispy, Delicious, And Utterly Blissful: The Best Recipe For Samosas

Crispy, Delicious, And Utterly Blissful: The Best Recipe For Samosas

Your Horoscope For August 1-7: Relationships, Work, Life, And Everything In Between