Hijabistan: Short Stories That Take Us Behind The Veil Into Women’s Lives

Set in the UK and Pakistan, Hijabistan delves into the lives of the faceless women in hijabs–those we gloss over as harmless, nameless, ageless, formless women. A young girl whose dull life she injects thrill into by flashing unknown men, a British-Asian Muslim girl finds herself drawn to the jihad in Syria only to realize the real fight is inside her, a woman who empowers herself through sex but won’t drop her hijab, till she realises the veil only covers her desires, not her body–stories of real women who find the hijab constricting, stories of real women who feel liberated by the hijab. In Hijabistan, we watch the hijab become many things–a symbol of a Muslim woman’s identity, a piece of cloth that sets women free from oppression and oppresses them at the same time. 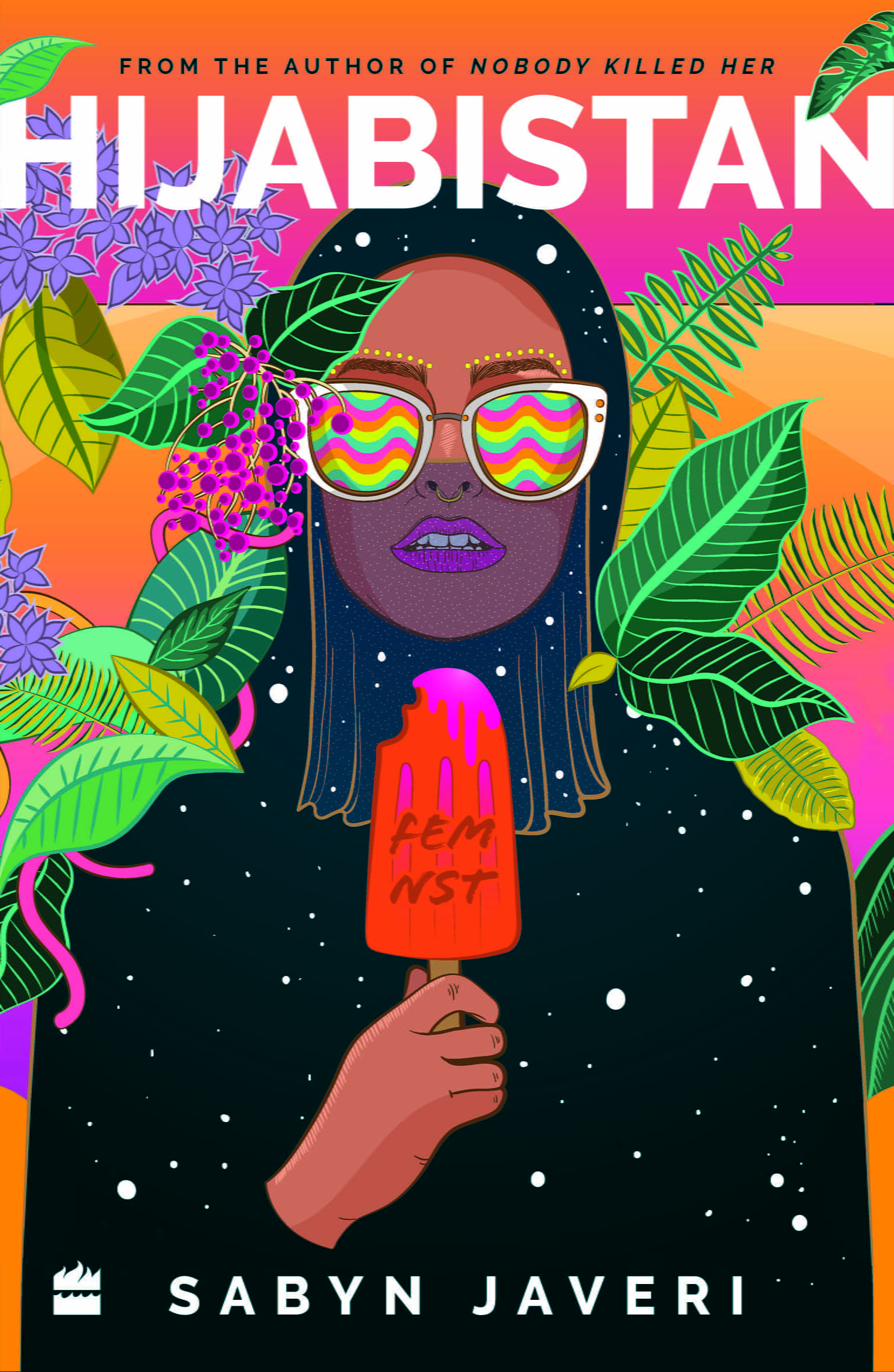 Read an excerpt from Hijabistan here:

Halfway through the chopping, she put down the knife. She seemed to be straining to hear something. Abruptly, she got up and walked towards the open door  of the balcony.

The words from an old film song drifted up towards her. And she inhaled them slowly, as if they were the aroma of a rich home brew. She found her heart slowing down. Her palms felt cold and she had to lean against the metal railings to steady herself. She remembered watching the film with her parents when she was a little girl. VCRs were a new thing in those days, obsolete as they are now. And she smiled at the thought of trying to explain to her children what they were. For a moment, and just a moment, the thought distracted her.

The shrill ringing of the phone broke into her thoughts and she looked guiltily at her mobile writhing on the table. For some inexplicable reason, its vibration reminded her of the dancers in the films of that era. ‘Helen,’ she whispered softly, smiling and shaking her head at the memory of the cabaret dancer, jerking her body in impossibly swift movements at breakneck speed. Everything was so black-and-white in those days, she thought. The roles of the good girl and the bad girl clearly defined. The heroine and the vamp, never mixed.

The phone stopped ringing and the stillness of the silence pressed upon her now. The radio downstairs had been switched off and she heard the banging of a door, as if someone had left the house. She was alone now. Alone
with her thoughts. A tangible panic gripped her throat, as if trying to trap her. A thousand fingers clutching her
neck and jaw. The sun seemed brighter, the wind harsher. She closed her eyes and a face appeared behind the closed
lids. It doubled into faces. Faces which were looking at her with great trust. You are not Helen, they assured her.
And she opened her eyes and started to laugh. But the laughter provided little relief. The restlessness within
her was growing with as much thrust and power as that of a magical beanstalk. She wanted to do something, but
what? As if to curb some mysterious urge, she pushed a flowerpot off the balcony’s edge. Immediately, she took
a step back, waiting for the sound of a crash. She waited for a loud thud, perhaps a scream, a yelp, a reproach.
When none came, she leaned forward and saw that the plant had fallen on the clean white sheets of her ground-
floor neighbour, which she had hung out to dry. The now-soiled sheets had cushioned the fall and fluttered
up at her as if to say a half-hearted hello. She stepped back again, placing a hand on her forehead as if to check
her own temperature. This was unlike her. Since when  had she become so destructive? And with a deep frown,
she wondered, so wasteful?

She waited for her neighbour to shout, but no sound travelled up and she exhaled – slowly, deeply. It was a
slippery feeling, she thought, the relief of getting away with something. She looked up at the white-hot sun
which looked like a hole burned in a blue cloth by some careless god, and touched her throat. Her neck. Finally,
her fingers rested on the space between her breasts. She pressed the hard bit. The bone or the cage or whatever
it was that kept her heart from escaping. Assured by the beating drums inside her, she allowed herself to think
back. To him. It came to her in little flashes, like swatches of colour, like sudden sparks from dying embers. The
memory of being with another man was something her mind seemed to block and obsess over at the same time. For a moment, she was reminded of the coloured-chalk drawings she would draw on the sidewalk when she was a little girl and how each morning the sweeper would come and wash them away with a bucket of water. What surprised her was how nothing had changed. Her daily routine, her children’s demands, her husband’s indifference … Everything around her remained the same.

She turned away. Away from the light and the wide open sky before her, and headed back to her dark, airless
kitchen. It was a space she knew well.

In the familiar arena of her domain, she inhaled the scents of peeled garlic, the nauseating stench of chopped onions and the suffocating smell of raw ginger.  She allowed herself to wonder, if only for a second, how it had happened.

Neither had expected it to happen. She a mother of three and he a divorcee rebuilding the foundations of his life, cherishing his new-found freedom, wearing his heart on his sleeve. Perhaps that is what they both had in common, these two completely unlikely beings.  A few moments of escape. Neither felt they were ready to let go of this precious free-floating state they found themselves in. Perhaps they wanted to hold on, just a little bit longer.

Now back in the kitchen as she chopped the okra, she felt certain that it was the man who had made the first move. She put the knife aside for a second and leaned back against the counter. Had she given him any sign at all? No, she decided. She hadn’t even imagined the possibility. Never thought of herself as someone who cheated. But could this be called infidelity?

‘Infidelity,’ she tried out the word on her tongue. ‘Infidel,’ she said, looking guiltily out of the door towards the Arabic verses embroidered into the wall hanging. Was she an infidel, she wondered, pulling her dupatta close to her skin. But try as she might, she couldn’t feel the guilt. Instead, all she felt was a strange kind of bewilderment. Surprised that something so extraordinary could happen to someone as ordinary as her. All she knew was that night, she had felt like a jug being emptied, a vessel that had poured out everything that was inside. But afterwards, she didn’t feel hollowed out. Instead, she felt fulfilled. Content. As if she had gained something. Or perhaps … she frowned, perhaps
it was the weight of the secret she carried within her body. For a second she wondered what would happen if her husband or her children found out. She traced the outline of the garlic on her chopping board. Adulteress, she wrote, arranging the pods in a trail of letters …Adultery, adult, idol, idolatry, adulatory…

Except there was no betrayal. She had made it all up. Yes, she nodded. It was best to think this a product of her imagination. To pen it down and preserve it in her memory forever as fiction.

A cry escaped her lips as she realized she had cut herself with the knife’s edge. A strange feeling of foreboding washed over her – a shudder, as if she had seen death’s angel. She felt herself shiver violently as a fat drop of blood landed on the cutting board, its scarlet hue disappearing into the wood almost immediately. A few seconds later, it was as if it had never happened.

The selected portion has been excerpted from Hijabistan, published by HarperCollins India.

Sabyn Javeri is an award-winning short-story writer and a novelist. She is a professor of literature and creative writing in Pakistan. Her first novel, Nobody Killed Her, was published in 2017.

You can buy Hijabistan here.