Rally driving and racing has always been seen as a boy’s sport. This is especially the case in India where a significant number of women don’t have the basic freedoms of going out alone or pursuing a career. And for a woman to make a fast-paced, high risk sport a career is almost unheard of. That’s why it’s so important to highlight the stories of success we hear about women in such fields. Garima Avtar is one such inspiring figure in the world of motor sports who has proved that if women get the same opportunities as men, they will race ahead.

Garima Avtar was not a rally driver from the beginning. In fact, her life in her 20s was nowhere close to the race track. However, the passion always existed. Garima Avtar’s fascinating story is also testament to the fact that it’s never too late in life to chase your dreams. Since 2011, Garima has participated in several major motor sports events in India including the Indian Rally Championship, the Raid De Himalaya, Desert Storm, the Mughal Rally and more.

In an exclusive interview with All About Eve, Garima Avtar opened up about her journey so far and what lies ahead for her. She also spoke to us about what it takes for a woman to succeed in male-dominated arenas and her advice for young women who are dreaming of an unconventional path for themselves.

Read on to know what she had to say.

All About Eve: What prompted you to start a career in such a heavily male-dominated arena?

Garima Avtar: I participated in my first rally in 2011, when I was 30+, and that’s pretty late in life. I never knew at that time that just a fun participation would become my calling and career. My dad had inculcated a spirit of adventure in me when he taught me driving at a young age. He was very progressive in his thinking and encouraged me to be fearless and take up challenges head on. With this kind of upbringing, it was hardly surprising that I took to motor sports.

But along with the thrill and excitement of getting into motor sports, I was also very apprehensive because this was a completely unexplored territory for me. Nobody from my family or friends are remotely associated with motor sports, and my father also was no more. Role models and mentors in this line of career were hard to find as women in motor sports were almost negligible at that time.

Regardless of not having a clearly defined and easy path, I realised that I was consumed by the passion to carve out a life that was uniquely my own and felt right for me. So, I just followed my heart and didn’t give up on my dreams.

AAE: A lot of our readers don’t know how rally racing differs from F1. Could you give us an introduction to the world of motor sports from your perspective?

GA: Rally cars run on actual public or private roads closed to traffic, and race one at a time on courses called stages where the fastest wins. The co-drivers (or navigators) call out the direction notes to the drivers. In rallying, the roads are not perfect and present all sorts of challenges. There are all kinds of track surfaces like gravel, tarmac, snow, sand, slush etc, and thus rally driving creates better drivers. Though we compete against the clock on the stage, back in the service park, we are one big family. And that’s because rallying is a non contact sport.

In circuit racing, all the cars race together on a closed track specifically built for racing. The winner is the first competitor to reach the chequered flag, which falls once the designated number of race laps have been completed. As racing is rubbing, it’s hard to make friends when you’ve been hit from behind, squeezed on to the dirt, or blocked on your qualifying lap.

But in both types of racing, the driver with the most skill, determination, and endurance wins. 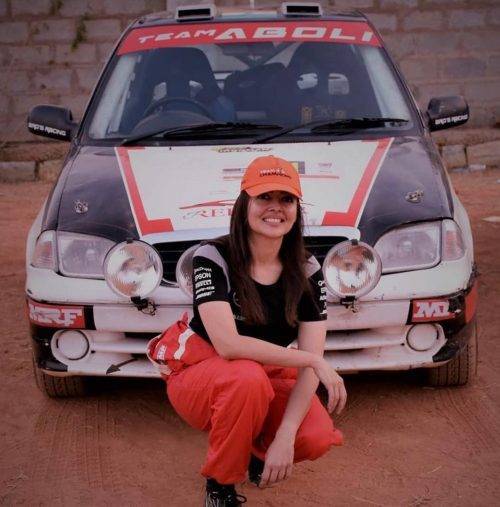 AAE: Motorsports is a dangerous field, a slight error in calculation or judgement can prove to be disastrous. What motivates you to get into the driver’s seat every time?

GA: Before the start of each race, we have the mental security that our rally car and gear meet high safety standards. Unless we adhere to all the safety requirements, and if we haven’t passed the extensive and strict FIA safety scrutiny compliance, we’re not even allowed to race.

After all this is in place, the rest is a leap of faith. Then I make a conscious commitment to focus exclusively on pushing my limits and performing on the edge.

AAE: What kind of cars have you driven in the course of your career? Any favourites?

AAE: What was your experience like in the beginning? Did you face any hostility being a woman in racing?

GA: Motorsports is essentially a male-dominated sport. So, as women, we have to really prove ourselves on the race track. I’ve personally never faced any issue related to a gender bias. Everyone has been very supportive and encouraging.

AAE: As you gained more and more success in the field, did you see a change in people’s perception towards women in rally driving?

GA: I think if one sincerely works hard towards honing one’s skills and invest in professional training, the quality of performance increases. This not only helped me gain more confidence but also earn more respect from my peers. It also gave me a tremendous sense of achievement when I won all the accolades.

AAE: Apart from such a busy career, you’ve also taken it upon yourself to bring more and more women drivers into prominence. Tell us about these efforts and what sort of feedback you’ve received for these events.

I had once led an all women’s self drive expedition to Spiti Valley, which is home to the world’s most treacherous roads. This trip was a once-in-a-lifetime experience and tremendously enriching for all the participants. We still reminisce it fondly.

AAE: Motorsports will always be a tough profession, more for women than for men owing to social perceptions. What would you like to say to young women, who are just about on the brink of choosing their careers and feeling social pressures to choose “women-friendly” fields over what they actually want to do?

GA: If it’s driving, or any other unconventional career that you want to take up, my advice to you would be that let nothing come in the way of your dreams. Don’t settle for good enough. Instead, do something that will truly make you happy and your life fulfilling. It can be easy to get swept up in worrying about the opinions of other people. We want the approval of our family and friends, but when it comes to dreams, it shouldn’t matter. The bottom line is that nobody has to live your life but you.

AAE: Going forward, what are your goals for the next few years, both professional and personal?

GA: To take my driving skills to the next level. And lead a more satisfying and meaningful life by actively participating in social service activities.

Garima Avtar will always be an inspiration for young women in India, especially for those who have always been told to rein in their dreams. Do you know of more such stories? Tell us in the comments!

Section 375 Proves That Bollywood's Understanding Of Consent Is Going Backwards

9 Benefits Of Peanut Oil That Will Probably Surprise You

Your Horoscope For November 28-December 4: Relationships, Work, Life, And Everything In Between