Churails Review: This Feminist Tale Is Not Perfect But It’s A Must Watch

Tera kaala dil, mere kaale nain – with this line in the title track, I knew instantly that I would binge watch this show. Churails, the latest rage in desi entertainment, is a dark, deeply disturbing, and poetic story. It’s the kind of poetry that hits you where it hurts and gets seared into your brain. The name, one realises soon enough, is an attempt to reclaim one of the oldest insults thrown at rebellious, non-conformist desi women. While I liked Churails from the beginning, it needs to come with a prominent trigger warning. There are depictions of graphic violence and torture which should be viewed with caution.

As an avid watcher of any Pakistani content I can find, Churails felt like an extremely refreshing departure from the regular fare. Enough with the saas bahu drama! 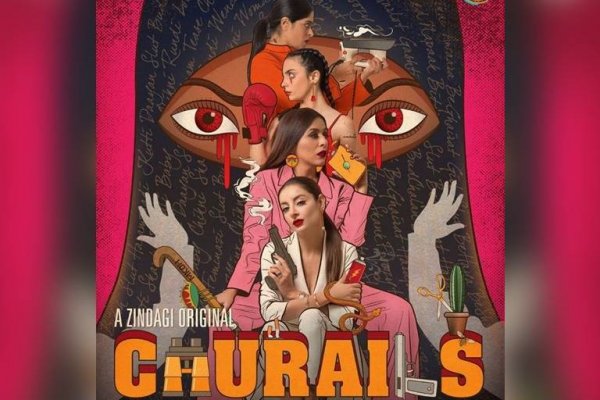 The director of Churails, Asim Abbasi, also made Cake, a painfully real story of unfulfilled dreams and resentment lurking behind the façade of a happy family. Starring Aamina Sheikh and Sanam Saeed, this film used dry, relatable humour which added immensely to its appeal.

Churails too starts with a similar kind of humour, courtesy Yasra Rizvi’s easy delivery of cutting sass which continues almost through the series. An event planner who is slowly losing her business, and for good reason it seems, Yasra’s character Jugnu starts off as a bored, rich brat who couldn’t give a damn about anything other than money. Her friend Sara, played by Sarwat Gilani, discovers a secret about her husband which threatens to shatter her perfect family. As revenge, Sara blackmails her husband to invest in her business. And her business is an all-women vigilante organisation which helps wronged women get revenge from their husbands. Sara and Jugnu vow to make money off the rich ones and help underprivileged women fight for justice pro bono. As the story progresses, an unlikely group, including former convicts, an aspiring boxer, hackers, and others, comes together to right the wrongs in the world… well, at least in Karachi. This group is called… yes, you guessed it… Churails.

While Sara and Jugnu are the main characters in the beginning, the other characters begin to develop really well in later episodes. Nimra Buchra’s Batool will give you chills, and you will cheer for Mehar Bano’s Zubeida at several points. Certain moments too will stay with you, either for their horror or humour. One of my favourites is the Churails’ version of the iconic “Jaa Simran Jaa”.

I have to admit I watched this show with a certain bias in my head. Women taking down men is my favourite genre, and I would’ve been happy if it was just that. But from the first episode, one can tell that Churails is more than just women against nasty men. The story quickly turns into a mystery worth binge watching.

Ready with your oppression checklist?

Churails has various issues on its hit list. Violence against women, transphobia, crippling poverty, bonded labour, economic disparity and the blinding privilege that comes with it, ridiculous excuses for wealth displays among the elite (khatna parties!), child abuse, marital rape, consent and “boys will be boys”, homosexuality, racism, and more. I know, this reads like a course list for Wokeness 101. And at certain points, it feels like that. But, to the makers’ credit, most of these issues have been woven well into the main storyline and been used as character development stories. Hopefully, in the near future, we will able to move away from sexual violence as character development devices for women.

The story has been told in a gripping manner. Every woman will find a character or situation in this show that will take her back to a time when someone said something in passing to remind her of her gender. She will look around her in that moment and see a reflection of herself and her thoughts, past or present, in the stories that have been brought together to make Churails. 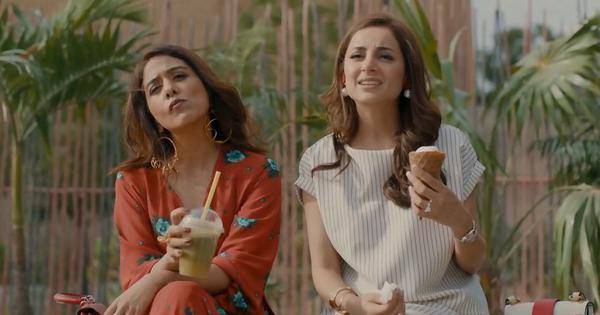 #NotAllMen-ers, relax! This show doesn’t hate men. There are a couple of good men, but they’re not treated as protagonists ever, which is great for a show like this. In fact, in one of the most subtle role reversals, a man in a romantic relationship refers to his girlfriend as “aap” while she calls him “tu”. As an Indian woman, I can tell you I have never seen this happen, either in reality or on the screen. However, the good that they do with sidelining the male characters seems to unravel a bit in the rush to finish the story in the end. We didn’t need the men to be rescuers in a story like this, and we really didn’t need the damsel-in-distress imagery. Also, the ending could have been compressed. The final revelation feels unnecessarily dragged out, and it gets frustrating as a viewer to see the protagonists take that long to put the puzzle together.

Criticism online and what stood out

Churails has been called out for its brushing aside of Jugnu’s homophobic comments and its inaccessibility to the very women it portrays. However, Jugnu has never been shown as a perfect character. Her comments, in my opinion, are a reflection of society rather than a glorification or brushing aside of homophobia. In fact, Churails depicts homosexual relationships, talks about them, and doesn’t show them as anything more or less than a heterosexual relationship. However, if they were going to show a mature lesbian relationship, it should have been explored further.

As for its inaccessibility to the Zubeidas and Batools of the real world, a show like Churails could not have been aired on mainstream media in either India or Pakistan. Neither government’s rules permit such content on our regular TV channels. So, till our governments continue to treat us like kids, online platforms with a concentration of privileged viewers are our best bet.

However, here are the problems I did notice with Churails, apart from those mentioned above – excessive use of the English language and a comparatively bland protagonist. The “elite” of the group often use English when talking to the other members of the group who are obviously not fluent in the language. And they, apparently, understand everything said with thick American accents. The protagonist, played by Sarwat Gilani, pales in comparison to the others. It would’ve been nice to see her glimpses of her life as a practising lawyer before she became “the perfect wife”. Also, allegations of plagiarising an artist is not a good look for a feminist show.

If you’re a south Asian woman who is perpetually angry, like me, there are moments you will love and moments that will hit you hard in Churails. Despite its flaws and its problems, this is a show worth watching and listening to. Make sure the men in your life watch it too. It’s an eye opener at several levels.

You can watch Churails on Zee5.

Millennials Are Not Getting Married, And We Finally Know Why

Millennials Are Not Getting Married, And We Finally Know Why

9 Benefits Of Peanut Oil That Will Probably Surprise You

Your Horoscope For November 28-December 4: Relationships, Work, Life, And Everything In Between